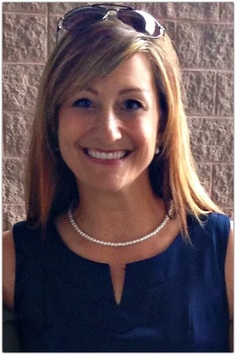 Robyn Starks Holcomb has over 20 years of experience throughout the Midwest as a motivating teacher, musician, actor, choreographer and clinician.
The head vocal director at Roosevelt High School in Sioux Falls, SD, Starks Holcomb has been conducting choirs in the high school, middle school and elementary school levels, spanning public and private schools as well as community chorus and church settings for 19 years.  Under her direction, the Roosevelt High School Concert Choir has performed by invitation at state conferences and in-services, at the State Capitol, in partnership with college choirs and celebrity talents, and in both Carnegie Hall and the Aaron Copland School of Music in New York City.  In 2015, the choir traveled to Los Angeles to perform and work with choral composer, Dan Forrest.  Holcomb also spends time outside of Roosevelt High School in demand as a music director, choreographer and judge/critique for musicals, vocal contests and show choir competitions.
Starks Holcomb was on faculty at the Dance Gallery of SD, Sioux Falls, for 13 years.  In that time, she taught multiple forms of dance including Ballet, Tap, Jazz, Broadway and Adaptive Movement for students with Down Syndrome.  She also spent four years touring and teaching literally thousands annually as a professional artist in residence through the South Dakota Arts Council’s Artists in Schools and Communities program; as well as serving as a guest clinician/summer faculty for in-services, workshops and college lecture/demonstrations.
A musical theater expert, Starks Holcomb has directed or performed in over 45 productions.  She has toured throughout the Midwest playing roles with both professional and amateur companies.  In 2005, she performed in and joined the directing team of a new world premiere musical Emporer Inc., working with artists from the Kennedy Center and Broadway’s The Lion King.  This January, 2015, BroadwayWorld.com Regional Theater Awards announced Starks Holcomb as Best Music Director for her work with Sioux Empire Community Theater on Little Shop of Horrors. Some of her favorite performance roles have included:  Mary Magdelene in Jesus Christ Superstar, Gypsy Rose Lee in Gypsy, Sally in You’re A Good Man, Charlie Brown and Louise in Always... Patsy Cline.  Directing/choreography credits include Little Shop of Horrors, Cabaret, Grease, Chicago, Forever Plaid, Hello Dolly, Anything Goes, Godspell, Suessical the Musical, Annie, Into the Woods, Shrek The Musical, Legally Blonde, and many more.  Starks Holcomb is in the ninth year of running a summer musical theatre camp in Sioux Falls for middle school and high school students which also produces an annual musical.  Former students of Holcomb have now appeared in national touring companies of The Wizard of Oz and Spamalot!
Robyn Starks Holcomb holds a B.M. from the University of MN, Minneapolis and an M.A. from Augustana College, Sioux Falls.